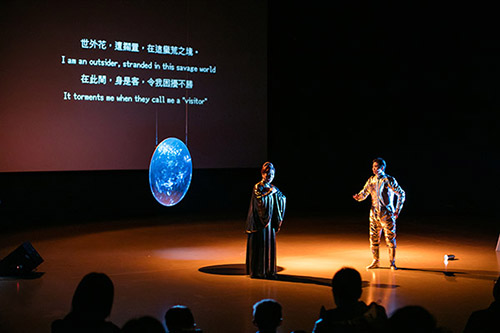 Looking At The Stars / 仰望星空

“Ming Wong’s live performance Looking at the Stars is a key chapter in his ongoing research into the seemingly opposite realms of traditional Cantonese opera and science fiction. Exploring the meeting of cinema, theatre, gender representation, and the intricate dance between language and translation, the performance draws inspiration from Andrei Tarkovsky’s genre-bending cinematic classic Solaris (1972) to tell a new kind of story. It also serves as an experimental exploration that will inform Wong’s staging of a full-fledged sci-fi influenced Cantonese opera production in the near future. 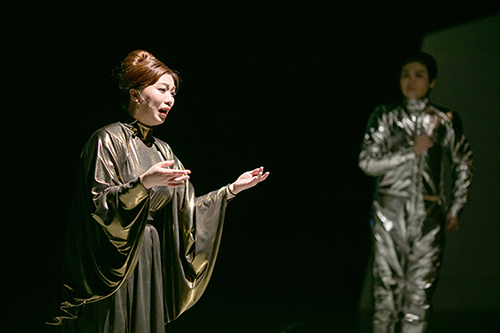 Looking at the Stars is a collaborative effort developed through workshops between Wong and young Cantonese opera actors and musicians. The resulting collection of gestures, images, and specially-written Cantonese opera passages – performed by female actors as a nod to traditional cross-gender roles – are staged with the atmospheric intensity of the deserted space station in Solaris. Moving in and out of different languages and styles, Looking at the Stars is an experimental piece that explores the idea of ‘live performance’ beyond a defined context or genre, and probe into the possible overlap between two different art forms.”